Builder Testimonial: A Q & A with Paul Knapp, owner of B S Knapp, Bristol

Paul has been in the building trade all his working life. Following his father’s retirement, two co-owners joined Paul’s business in the last few years. One disability adaptation project led to another, then another, and although this has become something of a specialism, Paul’s firm also takes on regular extensions and refurbishments.

Here’s the face-to-face chat we had with Paul.

“How easy do you find EstimatorXpress?”

“I’ll give you an example. A lady rang me up at half past nine in the morning, recommended by our plumber. At 10 o’clock I got the plans through by email. By 1 o’clock I’d priced the job, and emailed it to her. By 4.30 we’d agreed I was going to start the next week.

“It was a single rear extension. I did £70,000 worth of work in three hours, I tinkered about with the quote to make sure it was all as I wanted it. I sent it off to her and got the job.

“That is exactly what you want it to do. That’s impressive to somebody. If a builder can do that and go back to a customer and they say wow…”

“And you can keep up with demand?”

“I’ve got seven jobs that I’m currently pricing, everything from a small single corner extension up to a Grade II listed cottage. I’ve costed it all through the software.

“I can do the smaller jobs in a couple of hours because they’re easy. I can price a lot more because I know what to do. You can open it up and accept defaults. It’s easy.”

“Does the speed make a difference to your customers?”

“Definitely. A similar job, I went to see them on the Monday they were going on holiday on the Friday. Got it back to them on the Thursday, and that was without breaking a sweat, doing it quite nice and easily in between other jobs.

“After their holiday I called them and she said that ‘unfortunately not everyone is as efficient as you’. So there’s another tick in our favour. And all these go a long way.

“A customer though might think because you’ve done it so quickly you haven’t done it thoroughly. But if you can back it up with detail and show you’ve done it well, that everything is covered. ‘Yes the Velux windows, the electric ones as you wanted, and the underfloor heating’. It’s all there in the provisional costings and you can show it to them.”

“Have the quality of the estimates made a difference?”

“People have been really impressed by how we present things. I think it’s partly how the person at the front presents it and what you present to them that makes a difference. And if those two things match up – you’re one or two steps ahead of everyone else.

“People like how we present things. I use the Gantt Chart in EstimatorXpress. People really like to see that… this is the start date… this is when we estimate when we’ll finish it (with a fair wind).

“People like to see that you’ve actually thought about it, planned it. They’ve got more of a picture of what we’re doing, of what they can expect.

“Some you’re never going to win. You know some people are using you as a price checker.”

“How much information do you provide in your quotes?”

“It’s difficult. Sometimes you don’t want to give too much away. I send them the basic quote then when it comes to it, I open it up a bit – show them allowances – people want to know how much have you allowed for a bath, a shower screen.”

“Do you ever need some help from HBXL with your quoting?”

“I don’t mind ringing up because people are so helpful. You can feel a bit of an idiot thinking this is really obvious I just can’t see it…but it’s so much easier to talk. It’s knowing that you can ring up and you’re not going to be treated like a bit of a dunce and you’re going to get looked after.”

“Do you use any other HBXL software?”

“I’ve got ContractsXpert and Health & Safety Xpert. If you’re going to do it, do it properly.

“It does impress the clients. If you can say here’s the health and safety covered. This is the contract, it does give a good clean professional image. It’s what you want to show – that your organisation is better than everyone else’s.

“I lost money a while ago. I was advised to put it down to experience and tighten everything up. So I got ContractsXpert. It has a ‘Start straight away’ contract, where the client agrees to waive the 14-day cooling off period. Which is a really good thing for us, as often we get quick infill jobs and you need this contract.”

“How did you do your estimating before EstimatorXpress?”

“I was using a local QS. But his figures didn’t mean anything to me. I wanted to know how he came up with the costs? It was frustrating for him and me.

“I bought the earlier EstimatorXpress years ago. But I didn’t have time to do the learning and the work at the same time.

“I went back to using the Spon’s Price Book. Working out the costs manually and building it up that way. It was fine for the £40K jobs.

“When the jobs got bigger I couldn’t do it myself. So I used an estimator who was great but it became too expensive.

“I even had a go at using Easy Price Pro – it was easy to use because it was basic.

“But then I got a call from HBXL about the new pre-loaded templates in EstimatorXpress. So I had a look and it was working the way I wanted it to work. I decided, let’s set this up properly from day one. I looked at some videos. And now I use it all the time. It’s great.”

Thanks Paul for your feedback and telling us how much you think EstimatorXpress has improved over the last 8 years. The fact that pre-loaded project templates allow you to quickly and easily estimate and still get all the detail is a game changer – for you – and us! A win-win! 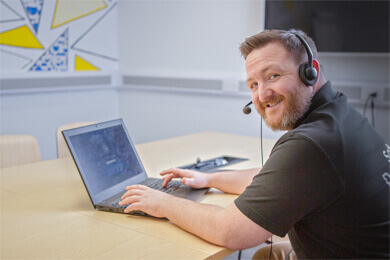