If there was ever a time to make sure your Support & Updates is active it’s now! EstimatorXpress, which earlier this year became the 2017 version, has undergone a very valuable update, although ‘update’ doesn’t really do it justice really. The really big news is the new ‘Estimate Wizard’. Starting a job is now just so much easier. Gone are the seven or eight steps to starting a job – now there’s just one instruction. Yes one! You’ll really notice the difference.

You can now simply choose to ‘start from scratch using estimating calculators’ or ‘Import PlansXpress for Rapid Take-off’. 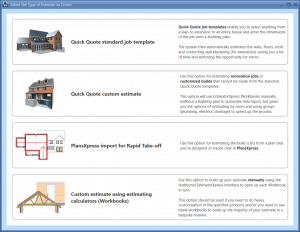 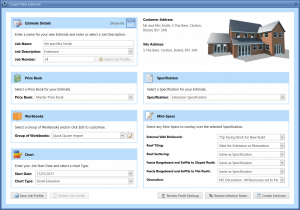 And then start filling in the detail of your job. You can check out the video here

Plus if you haven’t as yet purchased the Quick Quote plug-in, (great value at £299+VAT when you consider what it does) then this is what you’re missing out on… 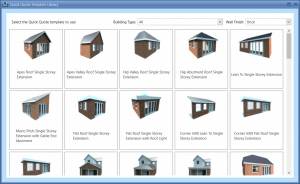 With the Quick Quote plug-in installed you are also presented with a third option to choose your 3D model from a huge selection of whole-project 3D models.

You can select a range of finishes of an extension for instance (render, brick, stone) and then you enter your job variables to create your new estimate. And we’re talking an estimate that can be carried out in around four minutes! See the video that proves it here.

It’s also worth watching our new video on the Quick Quote templates here.

A number of workbooks have been updated and new Quick Quote workbooks added. Take a look at some of the new Dims images. 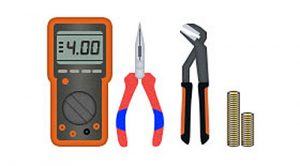 The team has also put prices in for items that were previously described as “to be defined” e.g. for roof trusses you would normally get a supplier quote, but we have given you a ‘safe’ price to avoid making work for you! The full list of updates and new additions can be found further down the page.

The thing with Microsoft Office and Windows…

…is that they make changes to their software which effect the many smaller software companies out there. So when Office 2016 and Windows 10 underwent recent changes we, like many other companies, had to fix various problems that these changes created. And then the next time they add a new fix, we’ll tweak the software to accommodate it, and the next time…

In fact, outside of our quarterly EstimatorXpress updates we release fixes for anything new that occurs so that your software will work correctly. So as long as your annual Support & Updates fee is paid, you will receive all the updates and fixes to the software and your program will always work.

And of course we are already working on our next round of updates which will be released by the end of September. In the meantime if you have any questions on the Summer Update, give the team a call on 0117 916 7899.

And to renew your Support & Updates simply go to the online shop.

Changes and additions to EstimatorXpress workbooks